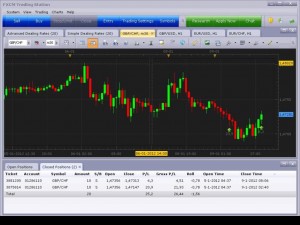 Monday opened with the pair gaping back up 40 odd pips then during the morning it returned back to our entry where our entry appeared to be acting as support. Eventually we did get the break down and stop loss was moved and 1/2 trade closed at + 20 pips. We got some more moves down which enabled another small stop loss move locking in a few more pips. It then broke the 1.47 price and then rebounded hitting our moved stop loss for 25 pips total for the trade. (this rebound was probably due in some part to the SNB boss getting sacked)
This was quite a hard trade to keep with for a variety of resaons . Initialy the trade when taken looked like it was going to drop nicely out of the signals that got us into it , this didnt happen so we were locked in over Thursday night and the weekend which is never fun. Not only that we also had to weather the NFP data on the Friday which sent things spiking around a bit . Anyway we made it out of the trade with some profit which is the main thing.